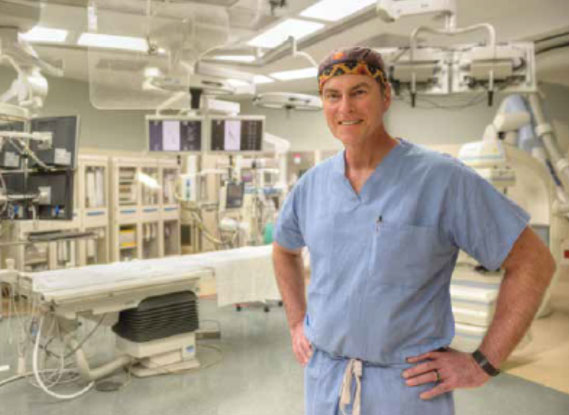 A new procedure under study at Kentucky Neuroscience Institute implants nerve cells into the brains of people suffering from Parkinson’s disease.  Preliminary results indicate the procedure helps control symptoms and may slow the disease’s progression.

“With these studies we want to figure out how the graft affects patients long-term,” said Craig van Horne, MD, PhD, the neurosurgeon and principal investigator on the project.

Van Horne’s procedure takes a nerve graft from the patient and grafts it into the affected area. There, the graft cells release chemicals believed to rejuvenate the brain’s weary dopamine-producing neurons. Van Horne said the problem with the brain is that after injury it doesn’t repair well. But in the peripheral nervous system, repairs happen more readily.

“That was a big question in the 1980s, why the peripheral nervous system can regenerate well if its neurons are damaged but the central nervous  system does not?” van Horne said.

Key findings by other scientists proved it’s the environment of chemical growth factors that’s different in PNS, not the neurons themselves.

In undergraduate research using goldfish, van Horne and one of his professors implanted PNS cells into the fishes’ CNS.  Their results showed the graft must touch the surrounding CNS cells for the graft’s release of chemical growth factors to be effective.

During his residency at Brigham and Women’s Hospital in Boston, van Horne trained in deep brain stimulation or DBS, a treatment for certain mid-and-later stage Parkinson’s disease patients. DBS uses a pacemaker to pulse electricity through one or more lead wires threaded through skull and into key parts of the brain.  The surgery to implant DBS leads would offer a key opportunity for van Horne’s future graft procedure. In later years, his research pinpointed Schwann cells- a type of support cells in the PNS – as producers of several chemicals that encourage regrowth in injured neurons.

In laboratory experiments, he found that incorporating both Schwann cells and neurons from the PNS helped  the grafts live longer in the brain. Recalling how the goldfish model provided its own graft tissue, van Horne and several of his students drew up a clinical trial that included all of the related findings.

“Couldn’t you just do that with a clinical trial – harvest the patient’s own peripheral nerve cells?” The body is not going to reject it immunologically. So we took all that and designed a trial,” he said.

It made sense to plant the graft during the DBS implantation surgery.  The DBS leads are inserted near where the graft must go. By combining the procedures, van Horne could use the same burr hole in the skull, lowering risk and causing less discomfort for patients afterward.

Though designed in Boston, van Horne’s clinical trial found a willing atmosphere and necessary funding assistance at UK and its Center for Clinical and Translational Science (CCTS). In mid-2011, the CCTS received a five-year, $20 million award from the National Institutes of Health to move innovative projects like van Horne’s from design to reality.

That and an offer to join the College of Medicine faculty played heavily in his decision to move to Kentucky in November 2011.

In coming years, the researchers plan to continue to track participants, perform more procedures, and test variations.  “What we are really going after is the (Parkinson’s disease) progression,” van Horne said.  “We’ll look at it two, three, four, five years out. We’re asking whether we can keep that process from getting worse, stop it all together or maybe improve it long term.”